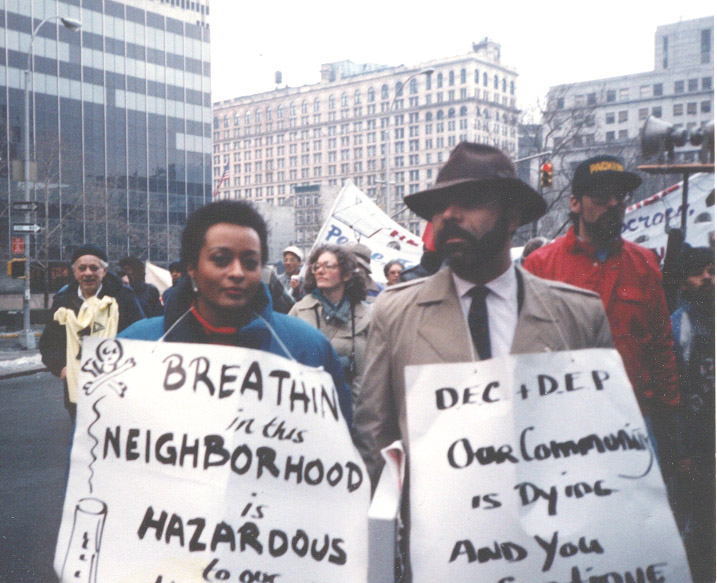 A Brief History of WE ACT

One of the first environmental organizations in New York State to be run by people of color, and the first environmental justice organization in New York City, WE ACT for Environmental Justice was founded and incorporated in 1988 as the result of local community struggles around environmental threats and resulting health disparities created by institutionalized racism and the lack of social and political capital, all dynamics that led to the siting and poor management of the North River Sewage Treatment Plant, the siting and operation of 6 out of 7 New York City diesel bus depots in Northern Manhattan, the operation in our community of the only 24-hour Marine Transfer Station in Manhattan, the use of Northern Manhattan communities as New York City’s dumping ground, and the exclusion of communities of color from democratic decision-making.

In 1988 WE ACT sued the New York City Department of Environmental Protection (DEP) for operating the North River Sewage Treatment Plant as a public and private nuisance. The lawsuit was settled in 1994 for $1.1 million, and WE ACT hired its first 3 staff members with a grant from the settlement funds. Today, WE ACT has 16 staff members.

WE ACT works to inform, educate, train and mobilize the predominately African-American and Latino residents of Northern Manhattan on issues that impact their quality of life – air, water, indoor pollution, toxins, land use and open space, waterfront development and usage, sanitation, transportation, historic preservation, regulatory enforcement, and citizen participation in public policy making. Committed to the Principles of Environmental Justice, WE ACT is an active and respected participant in the national Environmental Justice Movement, and has provided effective leadership in the development of the New York City and the northeast region environmental justice alliances to network, collaborate and impact environmental policy-making.

WE ACT was founded in March 1988 by Vernice Miller-Travis, Peggy Shepard and Chuck Sutton to address ongoing West Harlem community struggles around the poor management of the North River Sewage Treatment Plant and the targeting of Northern Manhattan for a sixth MTA bus depot (with only one other one on the island of Manhattan) at a site across from an intermediate school and a large housing development – a densely populated and heavily trafficked area. WE ACT evolved into an environmental justice organization committed to empowering the community to become a vocal, informed and proactive force that determines and implements its vision of what its environment can and should be.

The North River Sewage Treatment Plant's problem with noxious emissions extending into West Harlem proved to be a rallying point with residents who complained about the foul odors emanating from it and about suffering from respiratory problems since it began operating in April 1986. Using strong community mobilization tactics and a key civil disobedience strategy, "The Sewage Seven" – then West Harlem Democratic District Leaders Shepard and Sutton, then-state Senator and now Governor David Paterson, former Council member Hilton Clark and three others – were arrested for holding up traffic at 7 a.m. on the West Side Highway in front of the North River Sewage Treatment Plant on Martin Luther King Day, January 15, 1988. Gas-masked, placard-carrying community residents held up traffic across from the plant on Riverside Drive to dramatize the unbearable situation.

Three months later, WE ACT formed with three key objectives: to force New York City to fix the North River Sewage Treatment Plant, to gain the ability to participate in determining future siting and planning decisions for large-scale and potentially harmful facilities in West Harlem, and to affect the public policy agenda by positioning environmental justice as a major political issue. Since its inception, the organization has had major success in meeting these objectives.

Click Here for a Full Timeline of WE ACT's History.

The campaign around the North River Sewage Treatment Plant picked up momentum when a key elected official began to respond to community concerns about the plant's operation. WE ACT encouraged then-Manhattan Borough President (and later Mayor) David Dinkins to hire noted environmentalist and former presidential candidate Barry Commoner to research and submit a study of the operation of the plant. The resulting document armed residents with facts and figures critical to fight this complex problem and gain greater media credibility.

WE ACT met with numerous City and State officials through the years in an effort to exact a plan of action for correcting the plant's operational flaws. However, it took a lawsuit to make the City respond. On December 30, 1993, WE ACT reached a settlement of its lawsuit against the City for operating the North River Sewage Treatment Plant as a public and private nuisance. The settlement, negotiated by WE ACT's pro bono legal counsel Mark Silberman and Alan Birnbaum of Paul, Weiss, Rifkind and Wharton, as well as Eric Goldstein of the Natural Resources Defense Council (which was a co-plaintiff), who later joined WE ACT's Board of Directors, called for the establishment of a $1.1 million fund to address community concerns related to health, environment and service delivery.

WE ACT, in consultation with other plaintiffs in the lawsuit, controlled the fund and used it in part to further establish WE ACT as a formal, institutionalized West Harlem planning and advocacy organization. Most importantly, the settlement gave WE ACT and the other plaintiffs leverage to ensure that the City completed its $55 million fix-up of the North River Sewage Treatment Plant. If the City had failed to comply, WE ACT could have brought suit to enforce compliance with the City-State consent order and other agreements aimed at fixing and maintaining the plant.

WE ACT’s development from a small group of Northern Manhattan residents who were angry about the unfair treatment their community was receiving into a burgeoning entity that quickly attained national and international renown is significant in and of itself. The organization has galvanized a grassroots voice and concerns into an institution that has built capacity within under-served communities of color to provide leadership to do the following: