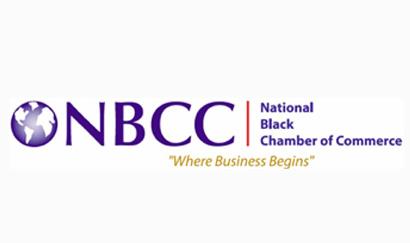 New York, N.Y, June 11th, 2015, WE ACT along with the 43 Ej organizations of the Environmental Justice Leadership Forum on Climate Change, released a fiery response to a misleading report from the National Black Chamber of Commerce (NBCC). In the report, the NBCC claimed that the Environmental Protection Agency’s (EPA) Clean Power Plan would, “Inflict severe and disproportionate economic burdens on poor families especially minorities.”

In response to the NBCC’s report, WE ACT’s Director of Federal Policy released the following statement:

“Polluted air from dirty energy sources makes our communities sick, resulting in unfair economic burdens on families from hospital costs to missed work days.  The solution is not for the EPA to withdraw the Clean Power Plan.  Instead, it’s an opportunity for the National Black Chamber of Commerce to fulfil its mission of economically empowering and sustaining African American communities through entrepreneurship by promoting and supporting clean energy and economic development- by way of the Clean Power Plan.”

The Clean Power Plan, if released would establish carbon emission rate reductions. This would happen through a framework created by individual states pending final approval from the EPA. If successful, it would reduce emissions by an estimated 30% below 2005 emission levels by 2030.

WE ACT has been one of the most active environmental justice groups, working to assure that the EPA submit consideration for EJ groups in the final plan. After several months of push-back and advocacy done by WE ACT and partnering Environmental and Climate Justice Groups, including over 200 submissions sent during the public commenting period, the EPA finally agreed to issue guidance on incorporating environmental justice into the clean power plan.

West Harlem Environmental Action, Inc. (WE ACT for Environmental Justice) is a Northern Manhattan community-based organization whose mission is to build healthy communities by assuring that people of color and/or low-income participate meaningfully in the creation of sound and fair environmental health and protection policies and practices. Follow us on Twitter, and like us on Facebook.