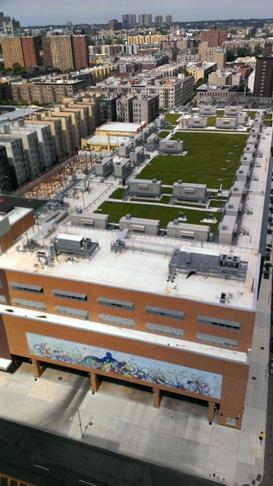 Where will the monitors go?
We are putting monitors in the balcony of residents’ apartments to measure noise from the bus traffic and the air exchangers on top of the building. We’re focusing on buildings 1, 4, and 5 of Esplanade Gardens. The monitors are being placed into different configurations: in one building, the monitors will be placed at different heights to measure change in noise vertically from near to the ground to higher up. The other series of monitors will be placed in apartments along the side of the depot to measure change in noise in the horizontal direction.

Why those buildings?
We hope that measuring in these two directions will help us to understand whether most of the noise is coming from the air exchangers, the bus traffic, or from other sources in the neighborhood. The monitors near the top of the building are particularly important to this because they have less shielding from the building behind them than the other monitors do. They will pick up noise from all the sources in the neighborhood, as opposed to noise from the depot alone.

How do the monitors work?
The monitors pick up changes in sound pressure – or how loud something is. They will take measurements every five seconds for about four days. They can't measure pitch or record conversations.