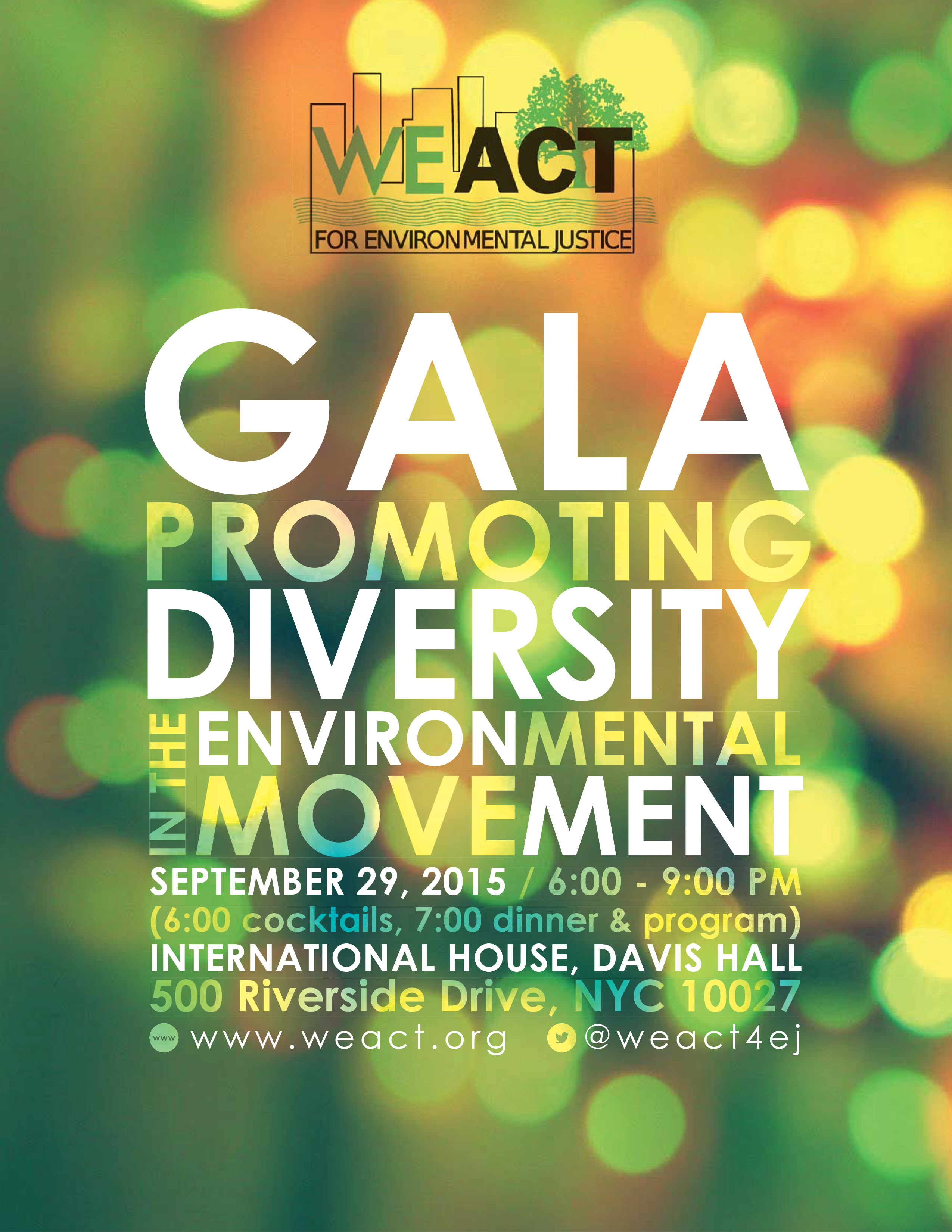 This year, WE ACT honors the work and achievements of these outstanding individuals whose efforts have led to increasing democratic engagement and an understanding of the diverse perspectives, which together, lead to healthy communities and a thriving planet for all.

Luis Garden Acosta is the Founder and President of El Puente, a nationally celebrated, Brooklyn based, community youth development organization.  Since 1982, El Puente has inspired and nurtured leadership to end community violence while organizing for democratic action, healing, and human rights. His passion for social action ranges from education reform to environmental justice, parks and open space to public wellness and culture, and is rooted in his commitment to the power of community.

Luis is a national activist who believes in non-violent, direct action. His vision of Latino inclusion in participatory planning and policy-making grounds El Puente’s Climate Change organizing in the overall struggle for community self-determination. Luis is presently leading El Puente’s Latino Climate Action Network - born from the organization’s facilitation of the first-ever leadership summit on Climate Change in Puerto Rico.

Spirited by a unique background as a graduate of St. Mary’s Seminary, Harvard Medical School, and an anti-poverty developer for NYC’s Office of the Mayor, Luis’ vocation has been one of making whole that which has been torn apart. He has embraced this mission by taking on a diversity of roles including community organizer, public health researcher, educator, radio anchor, hospital director and, always, a passionate writer and arts advocate. His engagement is evidenced in published work ranging from the Fordham Law Journal to the American Journal of Public Health, and in lectures and presentations at institutions such as the Institute of Medicine and Harvard University. His many awards include the Spirit of the City from the Cathedral of St. John the Divine, The Citizens Action and Public Works Awards, The Asian Americans for Equality Dream of Equality award, and the Brooklyn Botanic Garden Forsythia Award. Along with his partner, Frances Lucerna, Luis was also the 1998 winner of the Heinz Award for the Human Condition.

Tom Goldtooth is Dine’ and Dakota and lives in Minnesota. Since the late 1980’s, Tom has been deeply involved with environmental issues and programs, working within tribal governments to help with the development of indigenous-based environmental protection infrastructures. Tom works with indigenous peoples worldwide. He is known as a leader among the environmental justice grassroots movement in North America, and is focused on addressing toxics and health, mining, energy, climate, water, globalization, sustainable development and indigenous rights issues.

Tom is one of the founders of the Durban Group for Climate Justice; co-founder of Climate Justice NOW!; a co-founder of the U.S. based Environmental Justice Climate Change initiative and a member of the International Indigenous Peoples Forum on Climate Change, which operates as the indigenous caucus within the United Nation Framework Convention on Climate Change. Tom is a long-time policy adviser to indigenous communities on environmental protection and more recently on climate policy that focuses on mitigation, adaptation and concerns around false solutions.

As a prominent spokesman on environmental justice issues, he has been honored by the Sierra Club and the NAACP as a Green Hero of Color. He co-produced an award winning documentary film, Drumbeat For Mother Earth, which details the effects of bio-accumulative chemicals on indigenous communities. Tom has guided the growth of the Indigenous Environmental Network from a national to a global alliance. He has represented the rights of native peoples at the international level through UN treaty making bodies and conventions on persistent organic pollutants, global warming, biodiversity protection, mineral extraction, and water resources. Tom speaks on environmental justice with regard to the indigenous peoples of the world, both as injured parties and as sources of corrective wisdom for the planet’s ecological dilemmas.

James S. Hoyte was recently appointed Chairman of the Massachusetts Port Authority Employees Retirement System. Having retired as a senior administrator and lecturer in environmental policy at the Harvard University Center for the Environment in 2009, Mr. Hoyte is currently a Senior Advisor to several firms in Boston, including ADS Ventures. His work at Harvard includes serving as Associate VP and Assistant to the President, lecturer on environmental sciences and public policy at Harvard College and the Kennedy School of Government, he was a member of the Harvard University Committee on Environment, and co-founded the Working Group on Environmental Justice. He received his A.B. degree in Government from Harvard College, J.D. from Harvard Law School, and later completed the Program in Management Development at the Harvard Graduate School of Business and the Senior Executives in State and Local Government program at the Kennedy School of Government.

In addition to being published in environmental policy and management, Mr. Hoyte serves on the Board of Directors of numerous environmental and civic organizations including; the Posse Foundation; the Massachusetts Environmental Trust; the Union of Concerned Scientists; and is an emeritus board member at Earthwatch Institute, The Trust for Public Land, and Alternatives for Community and Environment (ACE), where he was a Founding Director. His awards include, the Arthur A. Fletcher Lifetime Achievement Award of the American Association for Access, Equity and Diversity, the New England Environmental Service Award from Tufts University, and many others.

Sarah M. Martin is a long time resident of West Harlem’s Grant Houses. She moved in just after getting married and recalls when the public housing complex had a strong sense of community. In 1994, the Grant Houses Residents’ Association was formed to work on issues within the housing complex and in the broader community. Ms. Martin was elected and served as both Vice President and President of the group. She worked with other community members to tackle trash and rat infestation issues and to help form the Morningside Heights/West Harlem Sanitation Coalition. Ms. Martin saw that efforts by the New York City Housing Authority to introduce trash reduction and recycling were unsuccessful because they didn’t include residents in their education and outreach efforts. And so, Ms. Martin and her coalition developed a hands-on educational approach to recycling that continues to be used by city agencies today, educating volunteers and the public on ways to reduce, reuse, and recycle.

Ms. Martin serves on the steering committee of the Broadway Democratic Club and has been able to turn Grant Houses, with its 1,940 apartments and more than 4,500 residents, into a powerful political force. She works on issues of air quality and asthma, noise reduction, public safety, and increasing the civic participation of her neighbors. Her grass-roots, door knocking efforts helped to make Grant Houses one of the most successful public housing recycling programs in the city. She continues to be active with the Morningside Area Alliance, Mt. Sinai’s Center for Occupational & Environmental Medicine, the Partnership Committee of the Morningside Retirement and Health Services, NYCHA’s Manhattan North Council of Presidents’ Committee, and is an active WE ACT member. In 2014, Ms. Martin was honored with the Clara Lemlich Social Activists Award, recognizing her social and environmental work in the community, tackling neighborhood issues and citywide environmental justice campaigns.

Denise Scott is Executive Vice President in charge of programs for the Local Initiatives Support Corporation (LISC), the nation's largest nonprofit focused on revitalizing distressed communities. With three decades of experience in community development, Ms. Scott leads LISC’s neighborhood investment efforts in 30 cities and rural areas in 39 states. She previously managed LISC’s flagship program in New York City, focusing on affordable housing, commercial corridors, education, health and jobs, in some of the city’s toughest neighborhoods. Prior to joining LISC, Ms. Scott spearheaded a range of public and nonprofit initiatives with the U.S. Department of Housing and Urban Development, the Upper Manhattan Empowerment Zone Development Corporation, the New York City Urban Coalition, the New York City Mayor's Office of Housing Coordination and the New York City Department of Housing Preservation and Development. She holds a Master’s degree in Urban Planning from Columbia University and has lectured at its Graduate School of Architecture, Planning, and Preservation.  Ms. Scott is based in LISC’s national headquarters in New York City.

Edison Severino came to the U.S. from the Dominican Republic when he was 19, and worked a variety of jobs to get by. In the early 1990s he worked as an asbestos handler before the industry was unionized. Wages were low, benefits were not provided, and overtime pay was not offered. The industry also routinely violated environmental regulations, stored toxic material in open containers, and denied workers protective clothing.

In 1996 the Laborers began organizing to unionize the asbestos industry, and Edison was passionate about the cause.  He helped led meetings and organized picket lines, and within four months, 1,700 asbestos workers, including Edison were organized. With his organizing skills he helped to organize other Latino workers across the country, including Alabama poultry workers whose employers threatened deportation if they tried to form a union. And when he returned to New York, his help organizing Laborers Local 79 demolition workers led to his hiring as a Business Agent, handling grievances, organizing new campaigns, and administering the collective bargaining agreement. Edison coordinated the Local 78 cleanup effort when the World Trade Center collapsed, and organized the United Immigrants Committee in response to wide dissatisfaction amongst the direction of the Union membership. In 2004, he was elected as Business Manager of the Local in one of the highest turn-outs in LIUNA electoral history.

Local 78’s members are 95 percent immigrants, predominantly Latino and Polish, and now perform 90% of all asbestos abatement in NYC and Long Island. Under Edison’s stewardship, Local 78 and the industry have jointly developed the groundbreaking Safety and Compliance Initiative which has helped improve the health and safety of workers while also protecting the environment.