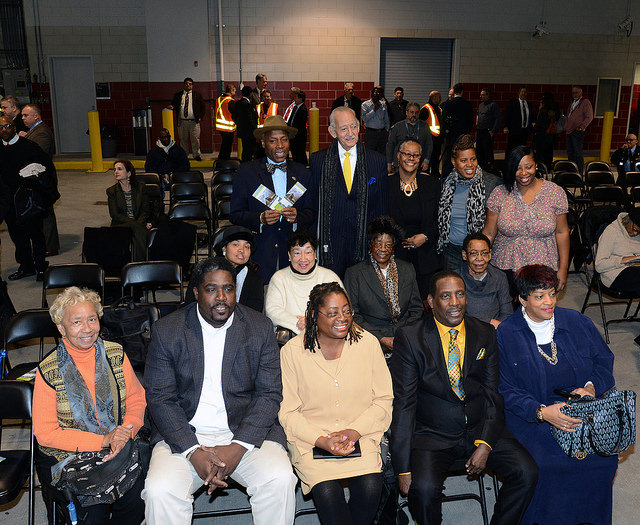 In September 2008, WE ACT for Environmental Justice, the Mother Clara Hale Community Task Force, and the Metropolitan Transit Authority (MTA) joined together in a historic process in order to create a joint vision for the rebuilding of the Mother Clara Hale Bus Depot. This groundbreaking collaboration promises to transform a former pollution source and burden of the quiet Central Harlem neighborhood into a shining example of green transit infrastructure. As part of this “makeover”, MTA pledged to install artwork that would honor the local community and African‐American contributions to New York’s transportation system.

Dubbed the Dirty Diesel Campaign, the slogan for which was "If You Live Uptown, Breathe at Your Own Risk" that created the political will for the Governor and key state legislators to mandate that the Metropolitan Transportation Authority (MTA) make hundreds of alternative fuel bus purchases and retrofit diesel depots to compressed natural gas. WE ACT's campaign was a catalyst for the MTA investing in diesel retrofits and hybrids. The MTA now boasts that it has the cleanest fleet in the nation.

Today, WE ACT is in an ongoing dialogue with the MTA regarding the closure and/or retrofitting of MTA depots. Citywide, one-third of the City’s entire bus fleet is housed in Northern Manhattan above 99th Street, and five out of six bus depots in Manhattan are above 99th Street. Organized with WE ACT’s support, the Residents Oversight Council (ROC) is composed of community residents living next door to these Northern Manhattan bus depots. Members of the ROC and their families experience the depots’ negative effects – including noise, particulate matter (soot) and nauseating fumes – in their homes on a daily basis. The ROC monitors activities at Northern Manhattan depots, such as excessive idling of buses. Members of the ROC have provided key testimony in public hearings, including a City Council Transportation Committee Hearing on Health Impacts of MTA Bus Operations held in October 2006, which was co-sponsored by WE ACT and John Liu, the Chair of the City Council Transportation Committee.

Congratulations to facilitators from the Central Harlem community, WE ACT, the Metropolitan Transportation Authority (MTA) and Parsons Brinckerhoff for successfully organizing the September 20, 2008 charrette(community planning session) for those most affected by the MTA's rebuilding of the Mother Clara Hale Bus Depot, particularly around the Esplanade Gardens complex.

After the MTA announced its plans to rebuild the bus depot according to green building standards, WE ACT and Assembly member Herman "Denny" Farrell organized a member, community-based task force to work with the MTA to ensure that the depot is clean, green and safe for community members and workers alike.  The September 20 charrette was the end of the beginning, rather than the beginning of the end, of that process.

WE ACT's report, "Community Concerns Over the Rebuilding of MTA's Mother Clara Hale Bus Depot," is available here.  Pre-meeting Information on the September 20, 2008 charrette to address those community concerns directly with MTA officials, including three community meetings prior to the charrette between September 10 and 17, is also available.

(Special thanks to Collette Ericsson of the MTA and Jacob Morris of the Harlem Historical Society for their assistance.)

The MTA has its own Web site describing its work at the Mother Clara Hale Bus Depot.