Title VI Complaint Against the MTA 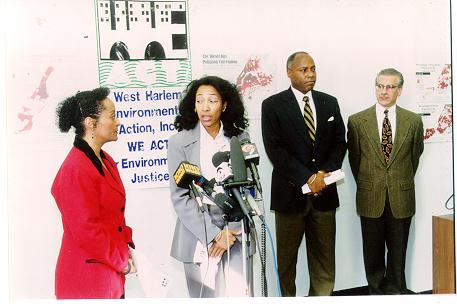 On November 15, 2000, WE ACT charged the Metropolitan Transportation Authority (MTA) with siting diesel bus depots and parking lots disproportionately in minority neighborhoods in Northern Manhattan (map), according to its racial discrimination complaint filed with the Federal Department of Transportation.

The complaint, filed by WE ACT under Title VI of the Civil Rights Act, stated that the MTA's housing of six of its then eight depots in Harlem and Washington Heights constituted racial discrimination because it exposed minority districts to higher levels of diesel exhaust, which is associated with elevated rates of respiratory ailments. WE ACT said that the opening of a new MTA diesel bus parking lot on West 215th Street over the summer of that year triggered its pursuit of Federal intervention to end the proliferation of MTA diesel buses in Northern Manhattan.

Samara Swanston, a civil rights attorney who co-filed the complaint with civil rights attorney Luke Cole, said that six depots in Northern Manhattan was too much. "Northern Manhattan is asthma ground zero," Swanston said at a press conference at WE ACT's headquarters on 125th Street. Environmental studies show that Northern Manhattan and South Bronx neighborhoods have the highest asthma rates citywide and some of the highest rates in the country. "We believe it's discriminatory because (MTA officials) are spending their money to place a disproportionate burden on low income communities and communities of color in New York City."

The Civil Rights Act bars federal funding for programs that discriminate against people on the basis of race, whether or not the discrimination was intentional. WE ACT's complaint, which was an alternative to a lawsuit, called for a moratorium on new depots, improved pollution monitoring and enforcement of current emissions standards, and an investigation by the Federal Department of Transportation with an eye on cutting off the $5 billion in federal funding that was planned for the MTA over the next four years.

Eric Goldstein, a co-director of the urban program at the Natural Resources Defense Council and WE ACT Board-member, said the lawsuit "raises some very serious question as to whether this community, even in the year 2000 is receiving more than its fair share of environmentally undesirable facilities."

Members of WE ACT and community leaders said the complaint came after years of failed attempts at negotiation with the MTA to relocate depots or lessen the impact of the hundreds of city buses that idle in lots and in streets around depots. David Givens, Chair of Community Board 11, and community residents from Harlem and Washington Heights joined WE ACT in the complaint, testifying to the destructive impacts of the diesel bus depots and diesel bus parking lots to the community.

WE ACT Executive Director Peggy Shepard said that the closing of the MTA's Walnut Depot in the Bronx in 1998 had led to 200 more buses being directed to Northern Manhattan. She said that the planned closure of the Hudson bus depot downtown would force the MTA to send more buses uptown to the reconstructed 100th Street depot in East Harlem, and that the MTA wasn't converting enough buses to burn cleaner natural gas. "Instead, in the new capital plan, the MTA is committed to buying hundreds more diesel buses," Shepard said.

Shepard said a large part of the air quality problem was the MTA practice of letting parked buses idle through the night along city streets, causing around-the-clock exhaust. "If the mayor wants to create a strong quality of life initiative, he ought to enforce the idling laws," she said.

Dierdre Parker, a spokeswoman for the MTA, said that she had seen a press release announcing the complaint but said, "We don't usually give statements on things that are in litigation."

Community leaders responded that that percentage was misleading. "We are faced with an epidemic," said Dennis Derryck, Chair of the WE ACT Board of Directors. "You know it's an epidemic when you get into a classroom and it's no longer a crisis if a kid leaves his or her inhaler at home because they can borrow one from a half a dozen or from anyone in that class," Derryck said.

Then Harlem Council member Bill Perkins (now State Senator) said the neighborhood was not receiving equitable treatment. "If this was in any other community, the MTA would not move a step forward, as it is trying to do now," said Perkins. "Maybe there's an assumption that these communities are indifferent, maybe there's an assumption that these communities have less concern or less political influence, but they need to relieve themselves of that assumption."

In November 2004, the Department of Transportation's Federal Transit Administration (FTA) released its review of NYCT operations. Although the FTA found that "the MTA is not, on balance, in violation of Title VI," it did find that the MTA failed to comply with the required federal environmental impact analysis in constructing, rehabilitating and reconstructing of bus depots and other facilities (see FTA Findings Re: FTA Complaint #s 2001.0053 and 2001.0062, at 7). The FTA review also found that the MTA failed to conduct appropriate studies of system-wide changes in planning and programming to ensure equal, no-discriminatory distribution of service facilities. It expressed concern that the MTA's practice of idling buses and running bus engines during winter nights would exacerbate poor local air quality, and it found that the MTA failed to follow existing FTA regulations requiring grantees to ensure that minority, low-income and other communities be afforded opportunities to participate "as equal partners" in transportation planning. Finally, although it acknowledged that the MTA had made significant efforts at mitigating and offsetting its adverse impacts on minority and low-income communities, the FTA concluded that the MTA must give due consideration to environmental justice principles in its siting decisions. Through our MTA Accountability Campaign, WE ACT is working to ensure that the MTA puts the DOT's mandate into practice.